Linganore Winecellars is a family-operated vineyard and winery nestled on 230 acres of picturesque rolling countryside, 4.5 miles northeast of historic New Market, Maryland. Established by Jack and Lucille Aellen in 1971, our first 6 acres of vineyards were planted in 1972 and the winery opened in 1976 in the lower half of a 19th-century post and beam barn which previously housed the farm’s dairy operation.

Using Lucille’s father’s hand winemaking equipment, we processed 6 tons of grapes our first year. In 1977, we held Maryland’s first wine festival as a way to introduce our first vintage to the public. In 1978, to meet consumer demand, we introduced the state’s first semi-sweet grape wines, an offshoot of our German-Swiss winemaking heritage. With the knowledge and experience in the production of these lighter style wines came the introduction that same year of our honey and pure fruit wines. 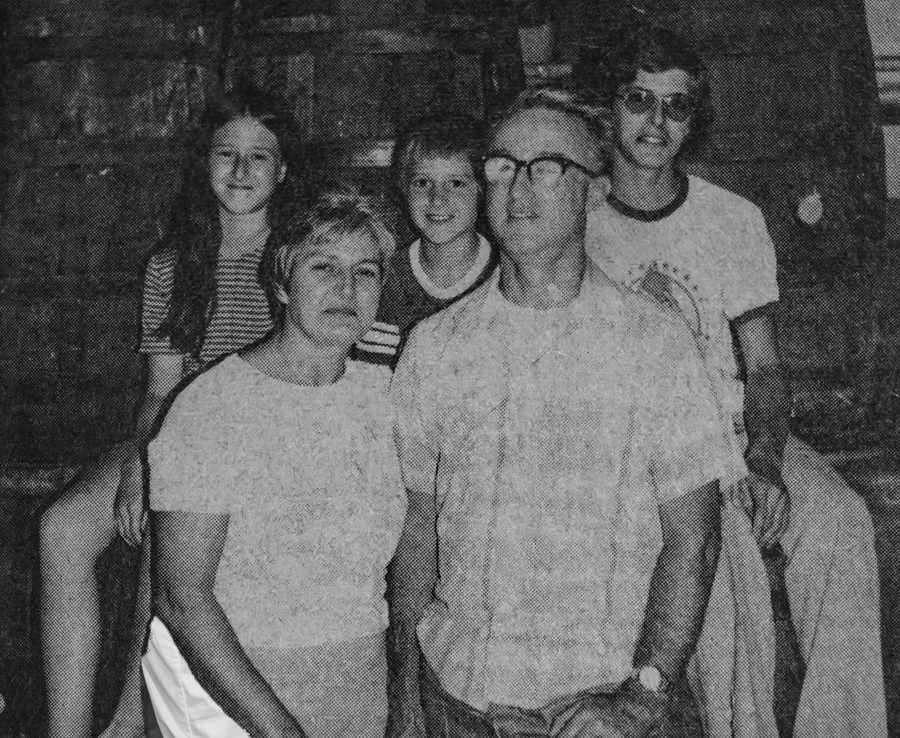 By the early ‘80s, the winemaking responsibilities were taken over by Jack and Lucille’s son Anthony. Also in the early ‘80s, new experimental grape varieties from the grape breeding program at Cornell University were planted in test plots in our vineyards. The success of many of these new hybrids has been shown in expanded acreage and dedication to winery production.

As the winery grew, so did our commitment to our customers. In 1982, we redesigned our tasting and sales facility to make it larger and more accessible to the public. That same year saw the expansion of both the festival grounds and the picnic areas. Since then our schedule has expanded to include 5 major festivals and more than 20 smaller indoor events throughout the year.

In 1983, recognizing the growing interest in regionally produced wines, Jack Aellen worked to establish the first federally designated grape growing area in Maryland, the Linganore Viticultural Area, which encompasses 90 square miles of land around the winery in the heart of Maryland.

In 1989, we introduced our custom label program for special occasions, private and corporate functions, and weddings.

In 1990, Anthony introduced dry fruit wines to our customers as an alternative to dry grape wines.

Also in mid-1990, Jack and Lucille’s youngest son, Eric, took on the management of the vineyards.

By 1997, expansion was in the works again with the addition of a new 5,000 sq. ft. warehouse and bottling facility which moved this part of the production out of the original dairy barn where the winery operation remained. This move saw the upgrade of bottling equipment from an all manual system that could handle 12 bottles per minute to a semi-automatic line at 22 bottles per minute. 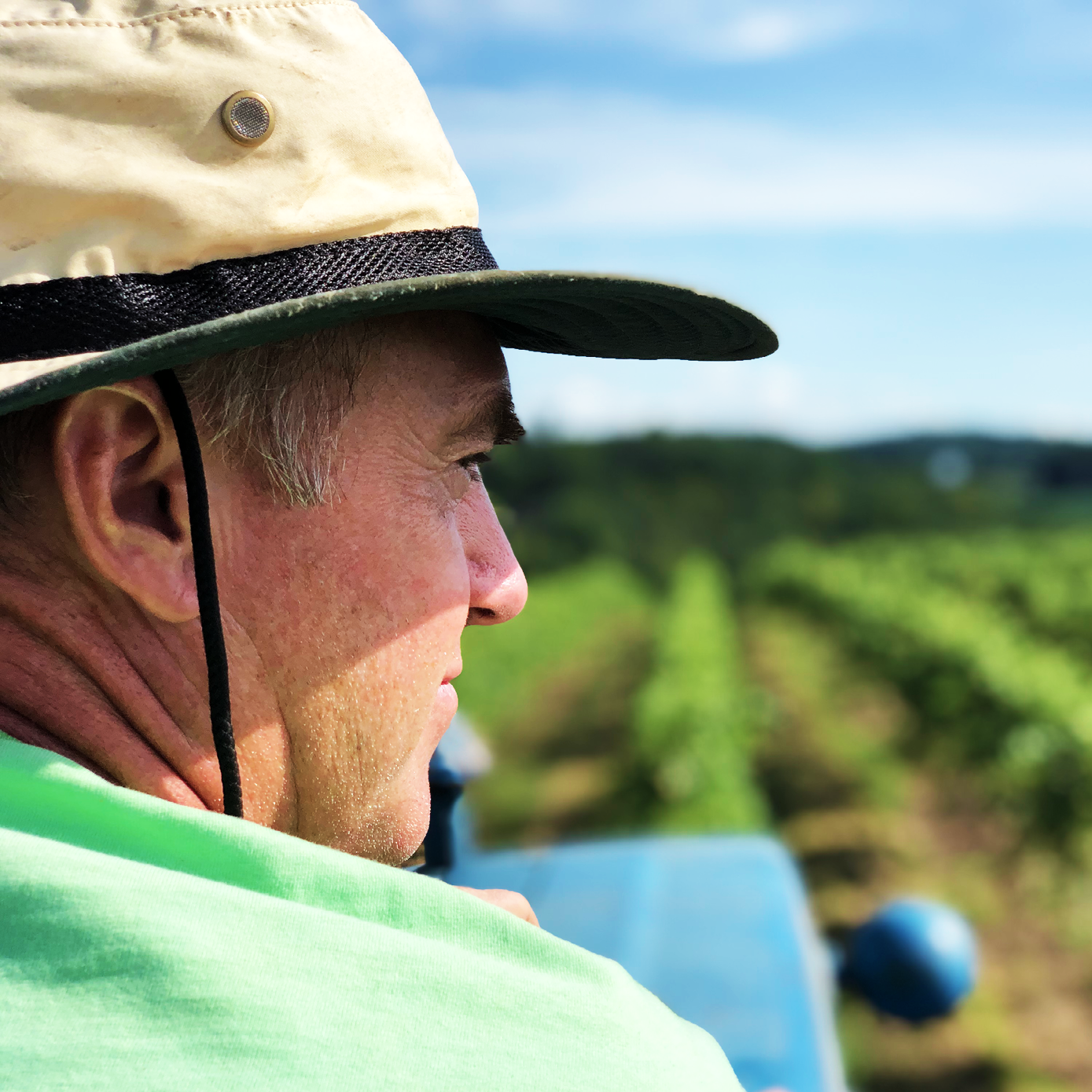 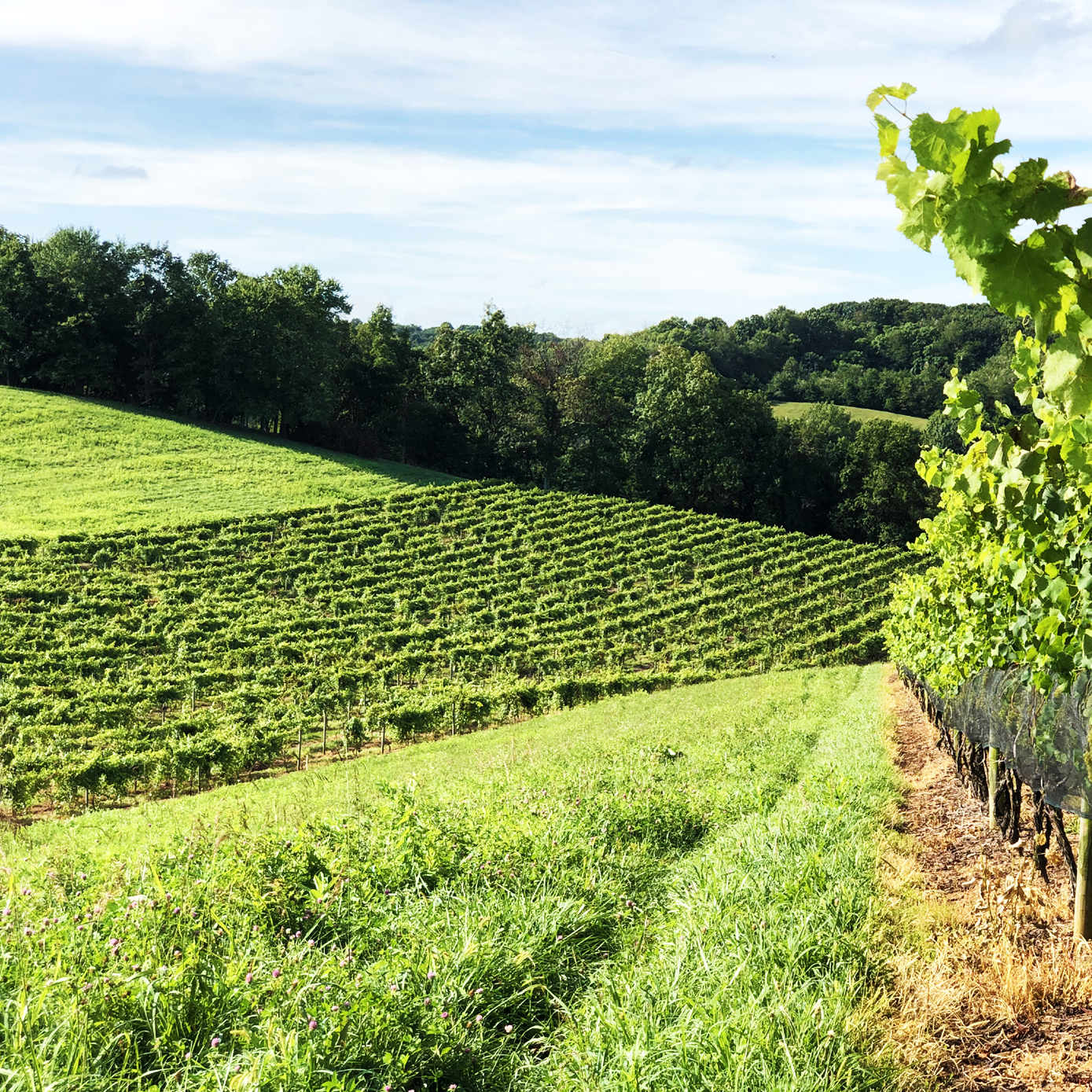 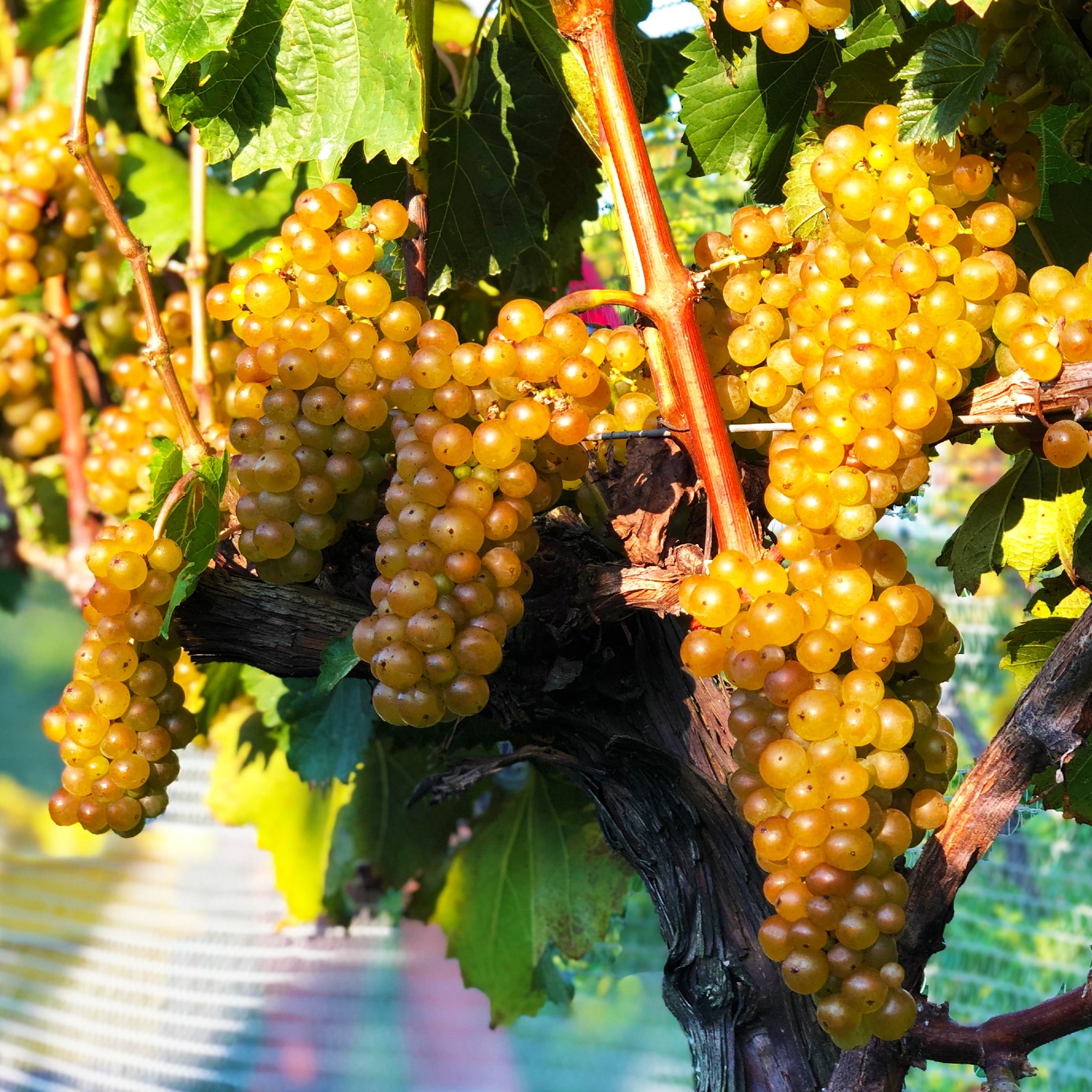 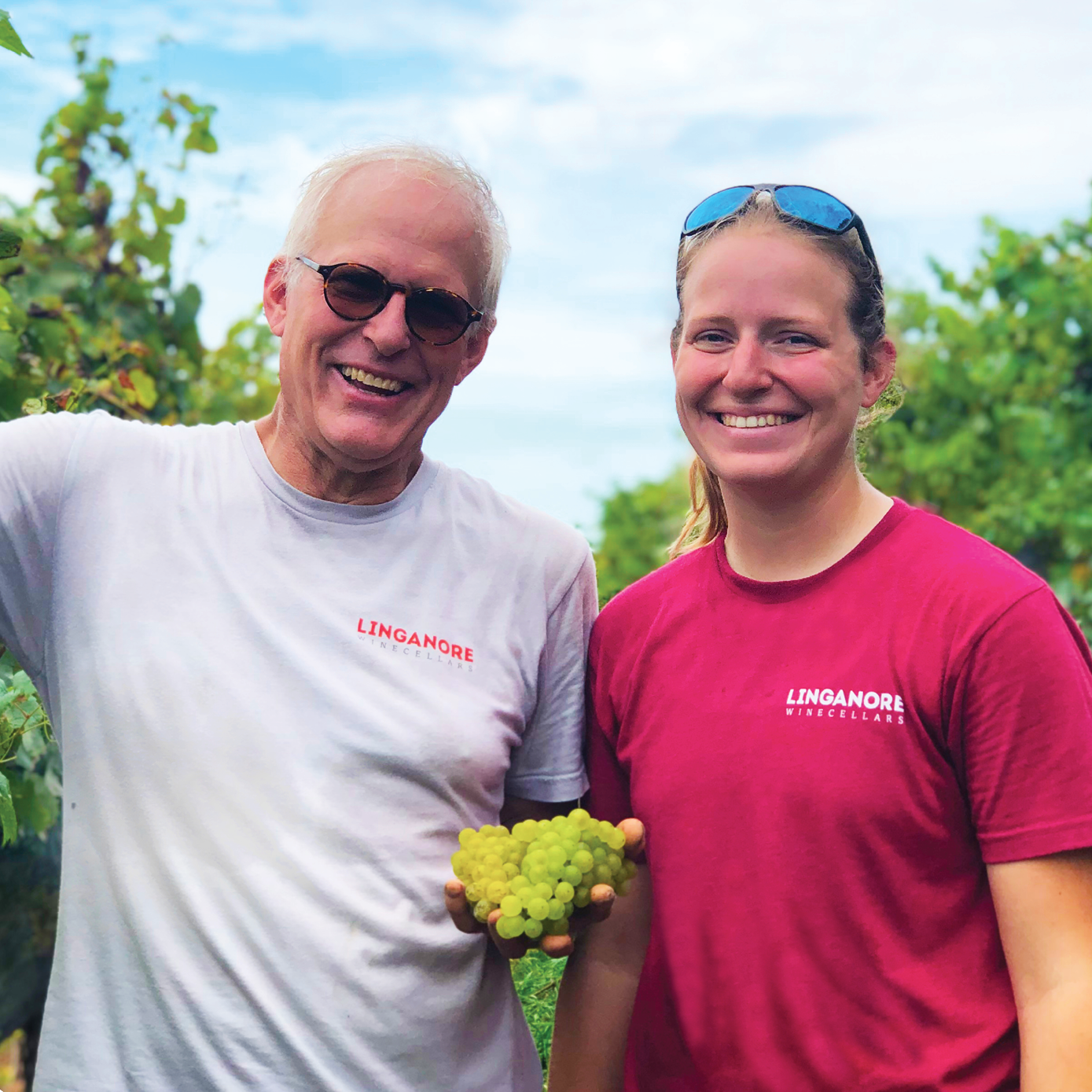 In 1999, expansion was in the works again with the addition of a 6,000 sq. ft. state of the art tank room and processing facility. This addition increased our capacity to over 100,000 gallons with enough expansion room to take us to close to 200,000 as we grow. We installed a German membrane press and numerous refrigerated tanks in the press room and banks of refrigerated fermentation tanks in the tank room which increased juice quality and in turn increased the quality of the finished wine.

In 2000, with over 40 acres of vineyards, we purchased the state’s first mechanical grape harvester. This machine greatly increased the speed at which the grapes can be harvested. We could now harvest in one hour what an eight-man crew could harvest in one day, reducing the time from harvest to processing to about 30 minutes. Decreasing the time from harvest to crush greatly increased overall juice and wine quality.

2003 saw the addition of a new bottling room to house a state of the art fully automated Italian bottling line, handling 60 bottles per minute; this was a substantial increase from the 22 bottles per minute with our previous bottling system. Additional new tanks were installed which increased capacity to just under 150,000 gallons.

In the fall of 2004, we started the renovation of our 19th-century bank barn which housed the winery in the lower level for its first 23 years. Completed in 2006, this grand structure with its black walnut beams and towering ceilings is now the home of our cask aging cellar, a new tasting/salesroom, and a spectacular banquet facility.

In 2005, we installed a centrifuge to clear the wines of sediment after fermentation. Centrifuging the wine eliminates the use of settling chemicals for clarification before aging and bottling. This process has significantly increased wine quality.

In 2011, power supplied to the winery was converted to 100% wind power, leading us to win 2011 Green Business of the Year, in the small to midsize business category, from the Baltimore Business Journal. We also received a grant from the Department of Agriculture which allowed for the installation of two Electric Car Charging Stations, that are powered by a sun tracking solar panel.

Our most recent endeavor was the installation of a wind anemometer, which will record wind speed to determine if we can install our own wind turbines further reducing our carbon footprint.

In looking toward the future, the third generation of Aellens is already hard at work around the winery forming their base for taking the winery into the future.

Melding Jack’s German-Swiss winemaking heritage with Lucille’s Italian winemaking roots and ever conscious of our customers’ tastes, Anthony has created a splendid variety of wines that have won over 200 medals in national and international competitions. Producing over 30 wines, ranging from stylish white and red dinner wines to elegant semi-sweet grape, fruit, and honey wines, our winery enjoys a reputation as a fun place to visit and a relaxed place to sample wines in a casual setting. Lucille’s cookbook about serving and cooking with wines has consistently whetted our customers’ appetites.

We welcome visitors 361 days a year to experience a fun-filled afternoon in a country setting where winemaking really is a family affair.