Eric Aellen, Linganore Winecellars Vineyard Manager and Vice President, was named “Ambassador of the Year” by the Tourism Council of Frederick County on Tuesday. He was recognized for his work in creating and executing the Frederick Wine Trail Poker Run in March of 2018. 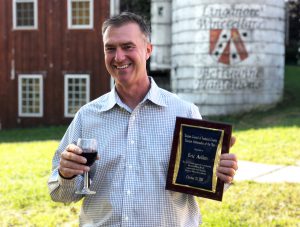 March is Maryland Wine Month, and Eric’s Poker Run idea included a majority of the wineries on the Frederick Wine Trail in an effort to raise awareness of the many great wineries that can be found in Frederick County.

“Being Frederick County’s oldest winery, we’re always try to support the industry and present opportunities for all winerys in the area,” Eric said. “We want to make it easier for us all to conduct business, so we’re constantly looking for new ways to support and include our local craft beverage industry partners. I’m very humbled that the Frederick Wine Trail Poker Run was able to do so.”

Eric knew that it would strengthen the area’s visibility to make a it cohesive effort. The Poker Run was the most creative and inclusive promotion within the Maryland Wineries Association, and it highlighted a major component of Frederick County’s tourism.