Home » Notes from the Cellar » Celebrating the big 4-0

Linganore Winecellars in Mt. Airy, Maryland, one of the oldest wineries on the East Coast, and in their second generation of wine making is celebrating its 40th anniversary with the start of the 2016 harvest from their 75 acre estate vineyards. Committed to making excellent wines of distinction, dry and sweet, grape, fruit and artisanal wines, the celebration will be kicked off on September 23rd, 24 and 25th at the winery.  Events are also planned for October, November and December 2016 (details below). 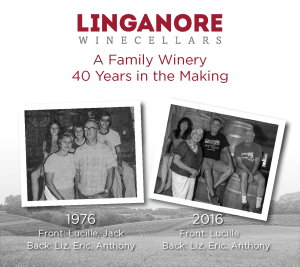 Having German-Swiss roots on Jack’s side and Italian roots on Lucille’s, wine making started as a hobby in hope of a dream.  In 1971, Jack and Lucille Aellen purchased the 230 acre farm and planted a few acres of vines on its rolling hills. In 1974, Lucille’s father gifted the Aellen’s with his hand press and two hand-crank crushers, which the family used to open the winery in 1976.  Understanding that one-size-did-not-fit-all when it comes to taste in wine, Jack strove to produce many different (30+) wines, becoming a pioneer in the industry, denoted by the Maryland Wine Association’s “Jack Aellen Cup” for Fruit wines and Meade.  That tradition continues to this day, with the winery producing 38 different types of wine in 2016. 1984 saw the passing on of the wine making to Anthony Aellen, now the Executive Winemaker and Eric followed later as Vineyard Manager.  With 75 acres of vineyards, the largest in Maryland, most Linganore wines are Estate Bottled (grown, produced and bottled on the Linganore property), and allows for excellence by careful tending and picking of grapes when conditions are optimal.  Originally begun in Hybrid grapes, the family added Vinifera a little over 10 years ago, which has expanded their dry wine offerings.  Crafting wines has become a wonderful pleasure to the family, as Anthony says that each year he gets one chance to make the perfect vintage.   This delight in their work has paid off, as their wines have won over 500 awards, with a double gold for their Reserve Cabernet and Reserve Chardonnay in the 2016 Maryland Governor’s Cup.

While the focus was on wine making, the Aellen’s had to make revisions to the farm as their clientele grew.  Turning the 150 year old American Chestnut wood barn used to store hay and farm equipment in the 1970’s into a very popular wedding venue, and repurposing the wood to turn the inside of the dairy barn on the property into an elegant tasting room, the family “farm” has become a place where friends, lovers and families are able to enjoy the beautiful scenery and setting in a relaxing atmosphere.  Jack was also the pioneer of the first Wine Festivals in Maryland, started in 1978, which still continues on the property from May through October.  In 2014, Red Shedman Brewery was opened on the property, with Vic Aellen bringing his Michigan brewing expertise of hand-crafting excellent beers.  Having done so much good, Jack and Lucille Aellen’s hopes certainly did become a dream, but not only for their family, but also for others, as the winery, which began humbly as a family endeavor, now is able to employ 35, adding to the wonder of a dream come true.

40th Anniversary Celebration Events:  All events held at the Winery.

December:  Our first Champagne release!  Offered first to Linganore’s Wine Club members on Dec. 2nd.  Available by the glass and for purchase at our annual “Christmas in the Barn” event on Dec. 3rd and 4th.